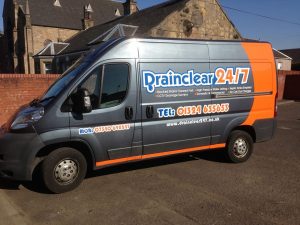 Elizabeth Lindsay, Falkirk said on 17/05/2021:
I contacted Cameron Weir on Sunday afternoon; he replied very promptly and arranged to come out at 8.00 the following morning. He cleared the outside drain quickly and efficiently, explaining what he had done and why it was necessary. I found him polite and pleasant and would certainly recommend him.

Gerry, Reddingmuirhead said on 09/05/2021:
Great service from Cameron. Problem solved quickly and efficiently. Would use again and highly recommend to others.

Allyson Stewart, Edinburgh said on 04/05/2021:
Cameron came promptly and without wasting any time unblocked our grey water pipe which was backing up. We would not hesitate recommending Drainclear247 if you are having issues with blocked pipes or drains.

David McDougal, Falkirk said on 25/01/2021:
Best service I have received from any tradesperson.  Always answers the phone, always arrive when they say they will, always does a great job.  Friendly, reliable service and gets the job sorted. Unfortunately, I have had to call on their services more often than I would like to, due to having a number of rental properties, but no matter the job Cameron and his team have fixed the issues in a professional manner.

Ian Grimshaw, Camelon said on 29/10/2020:
Cameron just left, great service very professional job done and dusted.  Thanks, and did not kill the bank.

LH, Grangemouth said on 08/08/2020:
Absolutely fantastic service from Cameron, who went above and beyond in resolving a drainage problem for my neighbours and I.  Cameron attended the same day I called him to look at what we initially thought was a straight- forward drain clearing job.  However, it transpired that the blockage was caused by a ‘Fatberg’ that had been accumulating over the years, which affected neighbouring properties too.  Cameron worked tirelessly to identify the blockage, which included opening multiple manholes and deploying his CCTV equipment to identify the blockage and thereafter disperse it.  Cameron’s van seemed to be stocked with every hose and tool you could possibly need, and he was a dab hand at using them.  Cameron explained everything he was doing to my neighbours & I and gave us completed peace of mind that the problem had been resolved.  Cameron is a true professional who clearly has thorough knowledge of plumbing and drainage systems.  As well as that, he is a really nice guy who is easy to deal with and you can trust.  Cameron’s service was exceptionally good value for money & I would recommend him to anyone.

Michael, Polmont said on 28/02/2020:
Fantastic service.  Courteous and polite thorough throughout.  Had a blocked toilet / waste pipe which had been supposedly cleared by another company.  The issue returned within 3 months.  Called Drainclear, not only did they locate a much larger underlying problem but fixed a further drainage issue and gave a full camera survey of all pipes.  They were also cheaper the original company.  Could not recommend highly enough and will be using them in the future.

Alan Campbell, Stenhousemuir said on 06/02/2020:
We had a macerator which had become blocked.  Les of Trustys recommended Drainclear.  I must say they were excellent; the blockage was cleared very quickly and efficiently.  Would recommend them and Trustys for organising everything.  A job well done.

Mrs Hodge, Polmont said on 21/01/2020:
I had a blocked toilet and contacted Trustys, where I was given Cameron’s number.   I phoned him mid afternoon and even though he was busy, he managed to come to my house just after five o’clock.   Cameron knew exactly what the problem was and had it sorted in fifteen minutes with no fuss whatsoever.  Cameron was everything you would expect of a workman and was very friendly and polite and put me very much at ease.  His service was super, and I would have him in my house any time.

Mrs Henderson, Falkirk said on 15/01/2020:
I contacted Cameron after getting his details from Trustys.   He attended promptly and done a great job unblocking my pipes.  I can now have a bath.

Gordon Alexander, Banknock said on 01/11/2019:
Excellent job done on our blocked drain – access to the drain was difficult due to thoughtless patio building by the previous owner, so Cameron needed to use the pipes in the roof instead.  Cheerful, professional service – if you need a drain unblocked, Drain Clear 24/7 is the place to go first.

Irene Hope, Falkirk said on 13/08/2019:
What a very pleasant and efficient person Cameron is.   I phoned him yesterday about a blocked drain.  He turned up this morning at 9 a.m., cleared the drain in a very short time, had to go and get replacement pipes and had it fixed before I knew he was back.  Would highly recommend him to anyone.

Verified Customer, Stenhousemuir said on 05/07/2019:
I phoned Cameron late in the afternoon as I had a drainage problem.  Although he was just on his way home, he made time for me and quickly resolved my problem.   Great friendly service.

Lynn Hunter, Grangemouth said on 31/10/2018:
When I discovered a blocked drain at one of my rentals I was dreading what lay ahead as the blockage was in the main piped under the shared driveway. I called Cameron as I know he has specialised equipment for problems like this. He went out that evening to have a look and I got a text shortly after to say “All sorted”. He had managed to clear it without having to dig up the pipes. A huge relief and a very big thank you to Cameron 😊

Carol, Falkirk said on 30/09/2018:
Phoned Drainclear yesterday about the down pipe at front of house which had been blocked for over a year.  They came out this morning and cleared it within half an hour!  So pleased. Why did I wait so long? Would definitely recommend – very pleasant manner, very quick and efficient!

E Pacitti, Redding said on 10/08/2018:
The fast and utterly brilliant service we received from Drainclear 24/7 was second to none. I called yesterday late afternoon with blocked pipes, had a visit within 2 hrs, when he supposed to be on holiday, and had the work completed to an extremely high standard this morning. Would highly recommend this company to anyone with plumbing or drain issues.

David Sinclair, Falkirk said on 09/08/2018:
We – i.e. Sinclair Services – have used Drainclear before to assist with a drainage problem at the back of our Victoria Road flats in Falkirk, and can confirm our positive recommendation – efficient, responsive and fairly priced.  A good guy service as suggested by Lynn!

Name Supplied, Falkirk said on 20/06/2018:
I contacted Drainclear 24/7 after finding their details on one of your leaflets.  They attended and done a great job and I was very pleased.

Lynn Hunter, Grangemouth said on 04/05/2018:
I asked Cameron to check the downpipe at my front door which has been blocked for about a year. We were putting this off as we were sure the pipe under our path was either blocked or had collapsed. We were expecting the entire path to have to be lifted and a hefty bill.  However to our delight Cameron was able to establish very quickly that it was just a blockage and he had it cleared in no time. To say we were thrilled is understatement of the year!! Thank you so much Cameron 😊

Kirstin, Redding said on 23/04/2018:
Sent in an email regarding our blocked drain: received a reply 10 mins later to say he could come out that afternoon. Drain was cleared quickly & efficiently, good price for the work and pleasant to deal with. I am more than happy to recommend Drainclear 24/7 to anyone.

Customers, Grangemouth said on 21/11/2017:
Drainclear did a great job clearing a blockage with our downpipe. We are very happy with the work they did and how quickly they came out.

Frank said on 21/02/2016:
I phoned “Drainclear 24/7” and they came out within 1Hr and did a great job to clear a complex problem in the drain. I would highly recommend them to anyone and would use them again if needed.