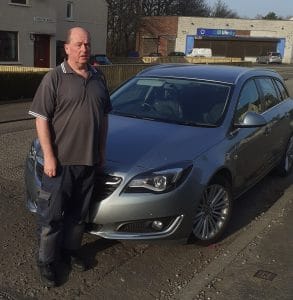 Appliance Technical Services (ATS) are owned and operated by Alastair Milne and are located in Bonnybridge.  Alastair has over 25 years’ experience in the service/repair of domestic appliances and is a Currys Authorised Service Partner.

Alastair’s feedback shows that his customers consider him a friendly chap who provides an efficient and professional service.

Alastair provides his service throughout the Central belt.  There is no charge for return visits for same repair and no payment is taken until job is completed.

Liz Bates, Dunipace said on 28/06/2022:
Called ATS this morning when water started pouring out of our washing machine. Spoke to Alastair, who stated that he could be round later in the day. About an hour and a half later he was at the door, and easily located the fault on the machine. He explained exactly what had happened, and proceeded to rectify the fault without any fuss or bother. Very reasonably priced and very quick service. I would have no hesitation in calling him again for any other problem with any of my other appliances.

Mr Thompson, Kirknewton said on 14/07/2021:
Ally came out a week ago and effectively repaired out a SMEG oven and dishwasher.  Ally was very professional and communicated very well.  He arrived exactly when he said he would and provided a very efficient service.   I was very impressed and really appreciated that he contacted me the following day to ensure everything was all right.  I have kept his number and will certainly contact him in the future if I require any appliance repairs.

Claire Harvie, Bonnybridge said on 10/06/2021:
Ally recently completed a repair on my dishwasher which required a replacement electrical component.  Ally was really quick to respond to my enquiry and I easily arranged everything via text.  The repair was carried out efficiently and my dishwasher, which I use every day has been working grand since.  Ally was lovely and friendly to deal with and his pricing was fair.  I would phone Ally again if I had similar problems and would definitely recommend him to others.

Mrs McNellis, Grangemouth said on 10/06/2021:
Ally recently fixed my washing machine, which needed a new door fitted.  Since the repair, it has been working like a dream.  He came to see me on the Tuesday and returned and fitted the part by the Thursday.  On both occasions he arrived bang on time.  Ally is really pleasant, and you can have a wee joke with him.  His pricing was brilliant, and I would definitely recommend him to others.  I’ve kept his number for future reference.

Mrs Fearn, Bathgate said on 01/06/2021:
Really good service, Ally was very helpful and was on time.  He was really chatty and friendly and managed to fix the problem with my American fridge/freezer.  He explained everything that needed repairing and was able to fix it there and then as he had the parts in his van.  Everything was completed within an hour and he left everything tidy.   The ice maker has been working perfect since and I have no complaints.  I would definitely use Ally again and would definitely recommend him.

Jodie, Redding said on 01/06/2021:
Ally saved us from having to buy a new washing machine, by carrying out an effective repair.  Ally was easy to contact and despite being very busy, he was able to fit us in.  He arrived on time, heeded Covid guidelines and quickly identified we had a worn motor.  He had the parts in his van and had the problem sorted quickly.  I don’t say this very often, but I would recommend him to friends and family if they were ever in need.

Mrs McLachlan, Cumbernauld said on 10/05/2021:
Alistair came out to look at my fridge freezer when I had a problem with it.  He quickly diagnosed the problem with it and told me that I needed a new part, that he would have to order.  He then returned, fitted the part and solved my problem.  A very efficient service and Alastair was very polite and courteous at all times.  Would definitely recommend him.