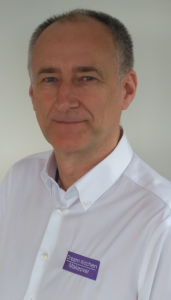 Malcolm & Peter are the team behind, Dream Kitchen Makeover Ltd.  They provide an affordable makeover service which gives an alternative to a new kitchen.  Replacing doors, panels and worktops can totally transform your kitchen and give it the fresh new look you desire.  Most importantly this is completed at a fraction of the cost of a new one and with less hassle and disruption.

All doors are made-to-measure so every size, dimension, style and colour can be provided no matter when it was made.  There is an extensive choice of worktops from including laminates, solid wood, solid surface (Acrylic) or Quartz.

Malcolm & Peter advise on layout and make best efforts to provide the most affordable kitchen without compromising on quality.  They also provide smart storage solutions such as pull out larders and drawers to maximise storage and minimise bending.  Their service includes:

As their feedback below shows, Malcolm & Peter are both professional and very friendly to deal with and care about their service.  They are meticulous about their work and always leave a quality finish that satisfies the customer and leads to future recommendations.  Malcolm & Peter always work together on each job which ensures familiarity and consistency and the price they quote is the price you pay.

Their service is available throughout the Forth Valley and they provide free quotes. 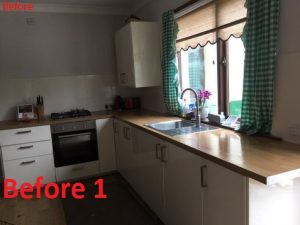 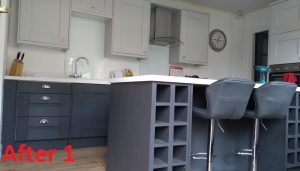 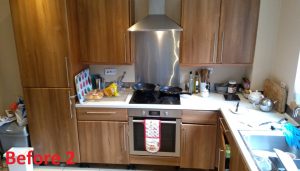 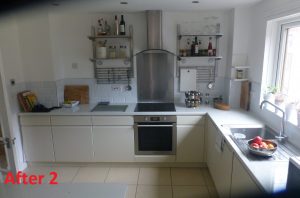 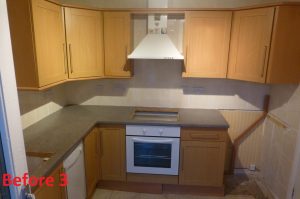 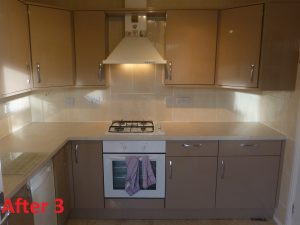 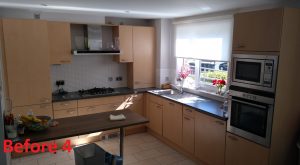 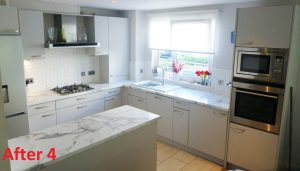 Jack & Andrea Welsh, Grangemouth said on 09/10/2021:
Malcolm and Peter have done an excellent job of our kitchen makeover. We even had a leek that we never knew about until the vinyl was lifted and was handled and repaired with no hassle. We are extremely happy with all their work and absolutely delighted with our new kitchen They are both very professional tradesmen and carry out superb work. Very highly recommended.

Jackie, Falkirk said on 24/03/2021:
Absolutely delighted with the finish of my Aunts kitchen – I was slightly wary that I would regret not paying the extra for a brand new kitchen however I was very wrong – the finish is fantastic really pleased – 5 star service

Diane Scott, Bo’ness said on 01/10/2020:
Malcolm and Peter were a delight to work with when designing and installing my dream kitchen. Malcolm project managed everyone from the tiler, plasterer, plumber & electrician. They all arrived on time and the day specified and always cleaned up after themselves. I have a beautiful new kitchen which I absolutely love. Unfortunately, I ended up in hospital whilst the work was getting done but Malcolm and his team were fantastic at communicating with me and keeping me updated. I have a quality kitchen and would recommend everyone involved in the project to anyone who asks.

Irene, Grangemouth said on 14/09/2020:
Malcolm recently added cupboards and worktop to my kitchen.  His work is superb, he gave me good advice and the work was carried out professionally and with great attention to detail.  The job was done in 2 days and was very reasonably priced I would not hesitate to recommend him.

Claire, Grangemouth said on 25/06/2020:
Have recently just had my kitchen renovated by this company. Can’t fault Malcolm at all took two days and my kitchen has been transformed. I found Malcolm to be professional and regularly kept in contact. Would recommend everyone uses this company.

Caroline, Grangemouth said on 19/02/2020:
Malcolm and Peter came recommend to us by a friend when we were looking to replace our kitchen.  I designed our kitchen and Malcolm was more than happy to work to my design, which was not the case with the other companies.  Malcolm listened to me and provided me with a great range of options and good practical advice.   Malcolm was also very reasonably priced, and his costing was less than half of another quote we received.  Malcolm and Peter supplied and fitted the whole kitchen which included units, worktops and a bespoke island with wine coolers at either side.  They also installed a Belfast porcelain sink and long pull out drawers.   In addition, they carried out work in the adjoining utility room which included boxing in the boiler with the same units as the kitchen and installing a worktop and storage.   Malcolm and Peter worked very hard and long hours to ensure that my kitchen was complete within the five-day time frame.  Their craftmanship was excellent and they were meticulous about everything they did.  The end result was super, and they provided a beautiful finish.  The job they done was amazing value for money and I would absolutely recommend them to anyone. (Images Before 1 & After 1 Refer)

Robert Gavin, Grangemouth said on 19/02/2020:
Malcolm provided and excellent service when I wanted an integrated kitchen door replaced in my caravan.  Malcolm was able to source a similar door which he drilled for the fittings and made the integrated fittings.  Malcolm came to my house one week to pick up the original door and came back a week later with the replacement door.  Malcolm was very pleasant to deal with and I would definitely recommend him.

Pat Nielsen, Cumbernauld said on 16/02/2020:
I contacted Malcolm as I wanted a new kitchen that was environmentally friendly and inexpensive.  On meeting Malcolm, I immediately liked him as he was very attentive and not a salesman.  Malcolm took the time to listen to me and provided good advice on layout and using my space effectively.  During the work Malcolm & Peter worked very carefully and took their time in what they were doing.  There were a few adjustments along the way, but they offered good solutions, and nothing was too much trouble.   In the end they replaced all my worktops and doors, made a cupboard and fitted a hob and a kitchen cooler.  I was really really impressed with the end product and my kitchen is a genuine transformation.  It is like having a brand-new kitchen and I know it will stand the test of time.  It was definitely value for money and environmentally friendly.  I would definitely recommend Malcolm and Peterto anyone.  (Images Before 2 & After 2 Refer)

William Bain, Denny said on 16/02/2020:
It’s the best and cleanest job I have ever had done.  The two joiners were absolutely grand.  They were clean and tidy and started on the button every day.  They changed all the doors and worktops and my kitchen looks brand new.  We honestly didn’t think that it would have turned out so good.  Malcolm was a complete gentleman and so easy to deal with.  It was definitely good value for money, and I would recommend them to anyone.  (Images Before 3 & After 3 Refer)

Jim Cliff, Carrickstone said on 15/02/2020:
Our kitchen had limited space and was 25 years old.   I contacted a couple of other companies, but they did not seem interested and I found their pricing too expensive.  When I met Malcolm, I found him very professional and I had a good gut feeling.  Malcolm then provided me with an acceptable quote for a kitchen makeover which included quartz worktops, new doors and new flooring.  Prior to commencing the work, Malcolm visited us a couple of times to firm up on details and our requirements.   When it came to the work, Malcolm & Peter were very professional.  I was very impressed that they managed to remove the existing worktops without causing any damage to the tiles.  During the installation they even managed to accommodate us with another couple of amendments, which we really appreciated.  We are absolutely delighted with the finish and love our new kitchen.  Other people who have visited my house have also admired our new kitchen.  Malcolm is really nice man and a pleasure to deal with.  I have already recommended them to friends and would highly recommend them to anyone.

Susan Roberts, Bridge Of Allan said on 15/02/2020:
Malcolm came recommended to me via a friend when I was looking for a new kitchen.  I am a person who spends a lot of time in their kitchen and I wanted something that was practical.   On Malcolm’s initial visit he provided very good advice with regards layout to maximise space and advised on the style of units and drawers to prevent me from bending so much.   I purchased my own appliances, but Malcolm was able to supply and fit the whole kitchen including splash backs and a new sink.  When it came to the installation Malcolm & Peter were very good and worked hard as did all the associated trades that Malcolm organised too.  I am very happy with my finished kitchen and Malcolm and team provided an excellent job from start to finish.  Malcolm is very affable, and you can tell he just wants to do a good job and keep the customer happy.   I would have no hesitation in recommending Malcolm to others.

Verified Customer, Bridge Of Allan said on 14/02/2020:
Malcolm and Peter came recommended to me and they have made a terrific all-round job of transforming my kitchen by replacing the worktops, drawers and doors.  They also installed sliding drawers for ease of use and access.  When Malcolm first came to visit me, he offered a huge range of choice and suggested good options for layout.  When they were working, Malcolm and Peter were there every day on time and worked hard and efficiently.  I was really impressed with the other jobs they done too, such as boxing in things that were previously on display.   I could not be happier with the finished job and it really looks like a brand-new kitchen, a genuine transformation.  Malcolm and Peter were a pleasure to have in my house and I could not be more pleased with their service.  The price was really good, and I would recommend them to others without hesitation.