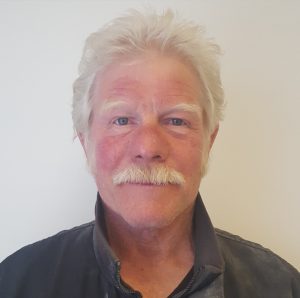 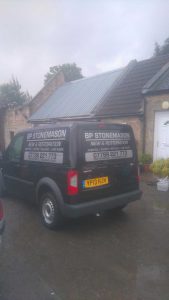 With nearly fifty years professional experience as a Stonemason, Bryan has all the skills and knowledge you will ever require.  Bryan truly deserves his reputation as a master craftsman and his skills include:

Bryan is available throughout Central Scotland for both domestic and commercial customers.  Please see a selection of his previous work below. 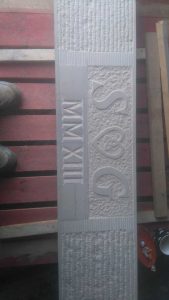 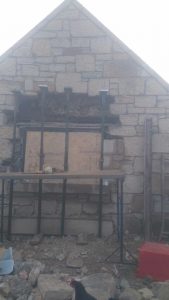 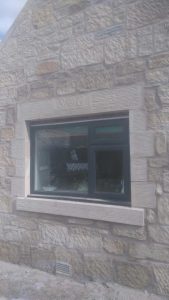 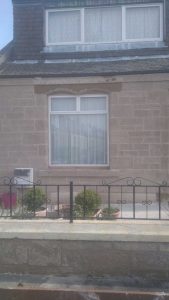 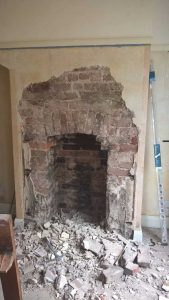 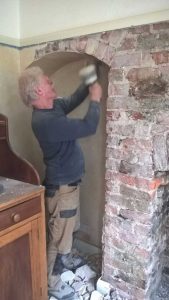 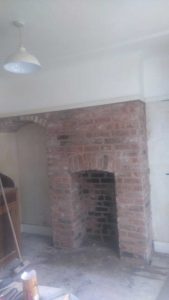 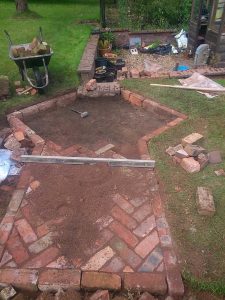 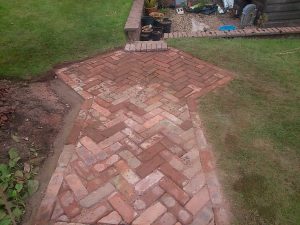 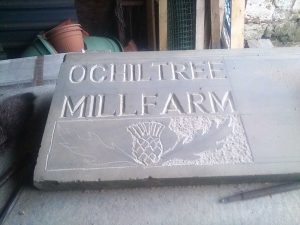 Nicky C, Falkirk said on 27/01/2022:
For 14years, and several costly attempts, we had been unable to resolve damp patches on our gable end wall. Finally, we found Bryan who has fully resolved the issue. The work looks beautiful too! Thank you Bryan.

D Scobbie, Stenhousemuir said on 29/08/2021:
Very pleased with the work carried out by Mr Pearson.  Cleaned the stonework on the front of our house and re-grouted also. Good job done.

Catherine Murdoch, Grangemouth said on 20/07/2021:
Bryan has just finished some sandstone work on our home. We are delighted with his high quality workmanship. We would highly recommend him.

M & J Peterson, Dunblane said on 12/05/2020:
Repair to badly damaged gatepost and stone wall of garden of listed property expertly and quickly completed, after a long wait for winter weather to pass so lime mortar work could be successfully executed. Looking at Bryan’s work it is obvious that he is a master of his trade.

Lisa Bennie, Grangemouth said on 17/09/2019:
I can thoroughly recommend Bryan to carry out any stonework. The wall he built for us is a 1st class job and far exceeded my expectations. Not only is Bryan’s work top class, he is extremely professional, pleasant, trustworthy and it was a real pleasure having him working at the house. Thanks for the recommendation on Trustys.

David Sinclair, Kinross said on 30/04/2019:
A big thank you and positive commendation for the excellent work, recently completed by Brian Pearson (stonemason) at one of our properties in Kinross.  He rebuilt the relevant stonewall in an efficient time frame, to a very high standard, and at a fair price. He is one of Trustys’ recommended contractors – quite rightly so! Again, Trustys has proven its worth as an excellent source for reliable and trustworthy professionals and tradesmen!

Derek, Stirling said on 28/05/2018:
I had Bryan out to fix a fireplace – really good job. Then I called him to fix an external wall that Stirling Council tried to fix with cement on a listed building, he fixed that also with no fuss.  Really old school professional. If you need a stonemason you can’t get better then Bryan.

Carol Rettie, Grangemouth siad on 29/11/2017:
Bryan has done work for us a couple of times.  Found his work excellent and nothing is too much bother for him.  Would recommend him without hesitation.

Mrs Buchan, Polmont said on 07/10/2016:
I have just had work done by Bryan Pearson,Stonemason. He came and saw the job, and came back and fixed our back door and patio steps as they needed reset and pointed. He did a very good job making them better than they had been originally when the patio laid. He fixed a couple of loose stones in our garden wall as well and was very reasonable with the price he charged. We would have him back again in the future for any stone work that needs done.

Sharon Smith said on 11/11/2015:
Bryan Pearson, Stonemason – had Bryan out to do some pointing work on our house and move part of a front wall. Done a great job and a lovely man. Would highly recommend and definitely will use again.

Alison McLean said on 16/09/2015:
We have just had Bryan Pearson Stonemason do work at our house. What a lovely obliging man, he came out, gave us a quote for the job, which was reasonable, came out one Saturday and finished the job in one day, and came back to do another wee job. I would not hesitate to recommend Bryan to anyone looking for a skilled stonemason.

Fiona Hamilton said on 27/08/2015:
Bryan Pearson and George have just finished working on the front of our house. We had horrible roughcast which was hiding beautiful sandstone. Bryan and George chipped off the old roughcast, to reveal the gorgeous stone underneath. They the repointed and carried out a few repairs. The transformation is amazing, these guys are brilliant, true craftsmen. They were both very knowledgeable, worked very hard and were very tidy. They go that extra mile. Never met such down to earth guys. If anyone wants to come and see the amazing job they have done please let me know. Great job, great price, thanks Bryan and George.

Evelyn Arthur said on 08/06/2015:
Bryan Pearson [Stonemason] I have just had Bryan reconstruct a sandstone wall after someone ran in to it and demolished it. Bryan re-built it using the original sandstone and now it is as good as new. Bryan is a lovely man nothing is too much bother,always prompt even in bad weather,very reasonable prices and a true artisan. Cannot recommend him highly enough. Many thanks Bryan and George.

David Skilling, Airth said on 20/05/2015:
Bryan Pearson. Thanks for a great service, Bryan called me straight back, came out at a time to suit me, very friendly, job done quickly and so well, and priced very fairly. I would definitely recommend him to anyone needing a Stonemason.

Heather Liveston said on 05/05/2015:
Bryan Pearson – Hi Lynn I wanted to add to the testimonials for Bryan Pearson, Stonemason. I asked Bryan to look at my mums wall which had a huge hole. Bryan came to see the wall straight away and I had his quote within a day or two. When I asked him to go ahead he started within the day and the work was finished quickly and to a great standard. He is friendly, and responds quickly to any questions. His work was appreciated by another neighbour who also then asked him to do some work. I had been nervous about getting a tradesman to do the work as I live some distance away and my mum is elderly and vulnerable. On meeting Bryan I was reassured that my mum would receive a good service and she did – would totally recommend.

Eileen Sharp said on 12/08/2014:
Bryan Pearson is a gentleman who is also a talented stonemason. We are delighted with the pointing we has done at the front of our house. Bryan was prompt and professional and I highly recommend him.

Evelyn Arthur said on 21/05/2014:
Bryan Pearson recently filled in an old pond we had,although not really in his line he agreed to fill it in and install a pre-formed pond in it instead so instead of an eye sore we have now got something we can be proud of. He is reliable hard working very reasonable and respects your property. So many thanks to Bryan and Dougie.

Robert Bissett I.Eng, DipTh, M.I.H.E.E.M, Tech. I.O.S.H said on 03/05/2014:
Bryan Pearson, is a first -class stonemason, very professional and proficient. He repointed the gable end of my 114 years old sandstone house in July 0f 2013. It needed repointing with lime mortar not cement mortar as I had previously been advised. Bryan was more than happy to give me advice and carried out a sample amount of pointing to let me see what the end result would look like. I was delighted with the sample. We agreed a price and a start date and Bryan arrived as promised. During the job we discussed the replacement of some of the sandstone blocks that were eroded and Bryan replaced them without any fuss. I felt confident that I could trust Bryan to do a good job and that is what he did. Bryan is very approachable, reliable, trustworthy and easy to get along with. My background is in Facilities Management and I have hired many different trades over my career, Bryan has to rank in the top bracket of tradesmen, I would stake my reputation on that. If anyone wants to look at the gable end please give me a call on 01324-610734 or just drive to 21, Hendry Street Bainsford and you can see the gable end from North Street.

Jim Reap, Bo’ness said on 24/04/2014:
I met Bryan in July 2013. He was recommended by a scaffolding company I had working for me. Bryan came to meet me at the time agreed. He was very approachable and friendly. I liked him instantly. He repointed the entire gable end of my 120 year old sandstone building. There were many major defects and various stones that were damaged or beyond repair. Bryan removed, cut stone and renewed the damaged stones. The repairs are undetectable. I was more than chuffed with the end result. Bryan never added anything to the price agreed. I felt that the repairs and new stone work was unforeseen and made Bryan take more money than the agreed price. Bryan is a true “master craftsman”. He is very punctual and more than reliable. His workmanship, knowledge and experience are second to none. Bryan has engaged in other work for me since the gable end. He is now my “in house stone mason”. I was really refreshed to meet such a quality, reliable, honest, decent, “tradesman”. He has personal and professional qualities I honestly didn’t think existed any more. I have met and been ripped off by so many “imposters” in the building trade over the years. Bryan has made me realise that there are still decent guys in the building trade. If you need any stonework done then I cannot stress enough that Bryan is THE guy you want to speak to. My gable end is available for any one to inspect. The result you will see will give you an indication of the quality work that Bryan turns out. The gable end in question is at 97 Corbiehall, Bo’ness.

Fraser Greenwood, Dunfermline said on 18/04/2014:
Bryan Pearson (Stone Mason) I required a wall to be constructed creating a rockery in my front garden. I contacted Mr Pearson who came along when arranged, he gave me a quote and we agreed a price. He turned up when he said he would come, left all areas tidy during the job and when he left, he also re-laid mono blocking which had been disturbed during the works. The wall he constructed in a tradition style with old fashioned coping stones is fantastic! He completed the job on time and at a very reasonable price. I would have no hesitation in recommending this tradesman.

MacGregor Drummond, MD Builders, Larbert said on 15/03/2014:
I’ve known Bryan for a long time and he’s a decent guy and does good work. I’m in the building trade myself (and on TrustyTrades) and I’ve passed work to him many a time when I’ve not been able to take it on, in the safe knowledge that he’ll do it to a really good standard. I would recommend him for TrustyTrades.

Sara Lee, Linlithgow said on 18/03/2014:
I can highly recommend the wonderful Bryan Pearson for a listing on TrustyTrades. He’s done some fab work for us over the years.

Louise Cullen said on 24/03/2014:
Bryan’s been doing work for us for over 10 years now. He knocked down a wall and put in a lintel and patio doors, built our pond and our patio and laid paths for us amongst lots of other things. He’s as honest as the day is long and we have the highest respect for him. The quality of his work is excellent – 10 years on his work is still as good as new. He’s always arrived when expected and he sticks to his quotes – never had any problem when it came to paying him. He also thinks on his feet and has given us great advice to get the job done the way we wanted it.